Its show time and the time for spring bonsai shows is rapidly approaching. In order to complete the presentation of your bonsai an appropriate companion planting, suiseki or figurine is often utilized next to the tree. Formal bonsai display requires study along with fine taste, which is a lengthy topic. Rather than to attempt to cover the theory, design and background of bonsai display, I’d like to present a quick and easy solution to creating an instant companion planting, which may enhance the presentation of your bonsai for your bonsai show.

Perennials are often used as companion plantings for bonsai. There are almost an unlimited number of different perennial species which are suitable for bonsai companion plantings. Dwarf or low growing plants work best. Often, when pot bound the foliage reduces in size and is more delicate. Pot bound companion plantings usually dry out quickly so keep many of them in a shallow saucer of water during the summer, especially dwarf Hostas with large leaf areas.

A few days ago I went to one of our local Lowe’s Home Improvement Centers and was surprised to see a display of dwarf Columbines growing in one quart pots for sale. The common Columbine, Aquilegia Canadensis, is a wild flower native to eastern North America, which reaches heights of approximately two feet. 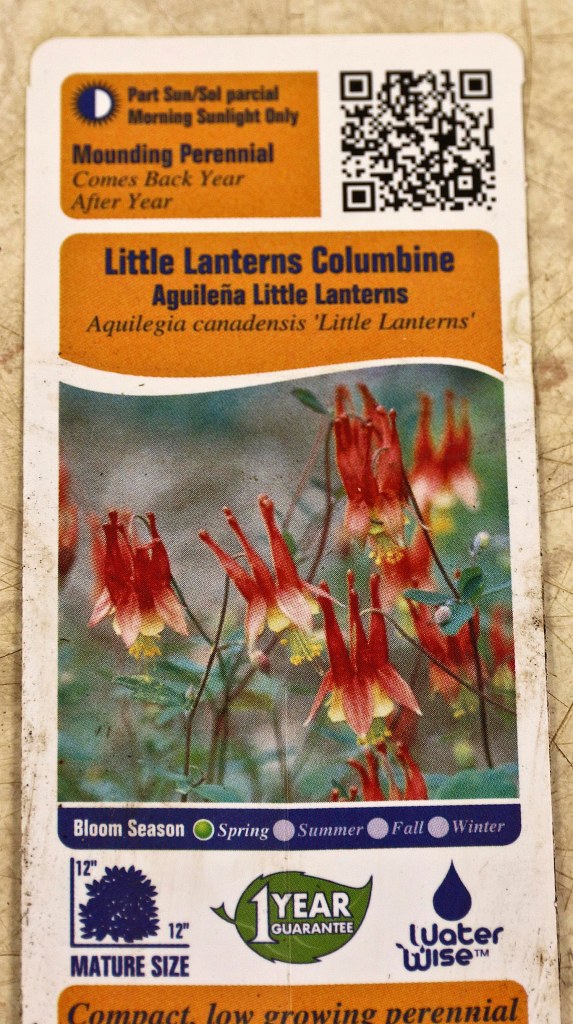 The dwarf Columbine cultivar ‘Little Lanterns’ is an excellent dwarf mounding perennial suited for small areas and rock gardens because it only grows to ten or twelve inches in height. The small deep red and yellow nodding flowers stand above the blue green foliage and often last from April to June depending on the weather. I purchased a few pots of the ‘Little Lanterns’ columbine at $3.98 each and returned to my studio to create a spring blossoming bonsai companion planting. 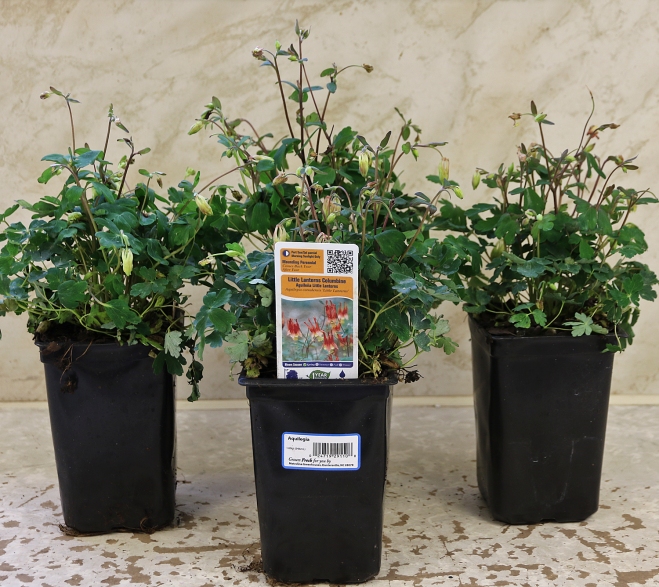 Two of these three plants are to be combined for the companion planting. The third plant was planted in a smaller container which will be displayed with a smaller size bonsai 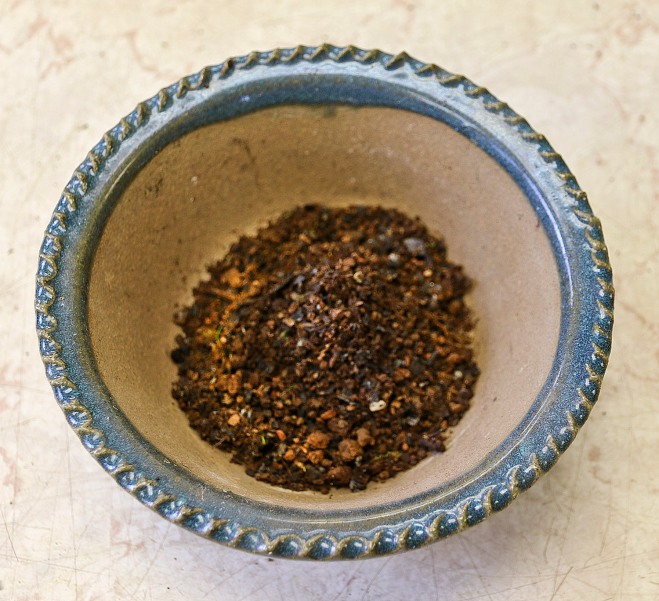 A small amount of the original soil, mixed with bonsai soil was first placed on the bottom of the container

Two of the ‘Little Lanterns’ columbines were selected for the companion planting since I wanted a full container of plants. Plants with plenty of unopened flower buds were selected to prolong the flowering season display. Its always advisable to select plants with many unopened flower buds to extend the blossoming period. However, try to select plants with at least one open flower bud to make certain the color will be suitable for displaying with a bonsai and especially is not the same color as the companion planting container. 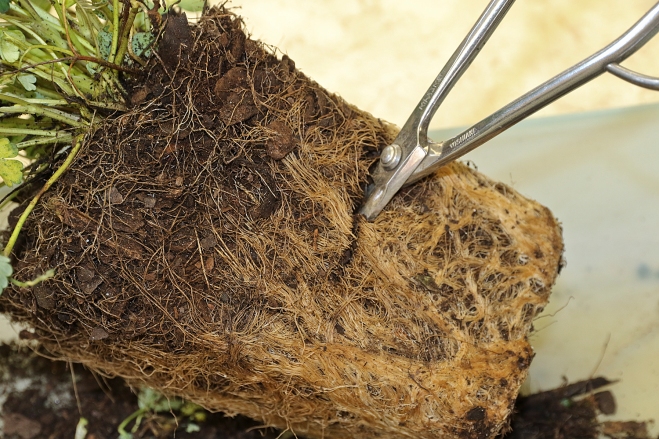 Although the pant appears to be pot bound, it is not

Each plant was removed from the one quart plastic growing pot and was severely root pruned. Then about half of the soil was removed from one side of each of the two plants and they were combined to create a single plant.

A little bonsai soil was mixed with the original peat/bark nursery soil to fill the display container. The completed companion planting was immediately thoroughly watered and placed in the shade to recover from the transplanting. 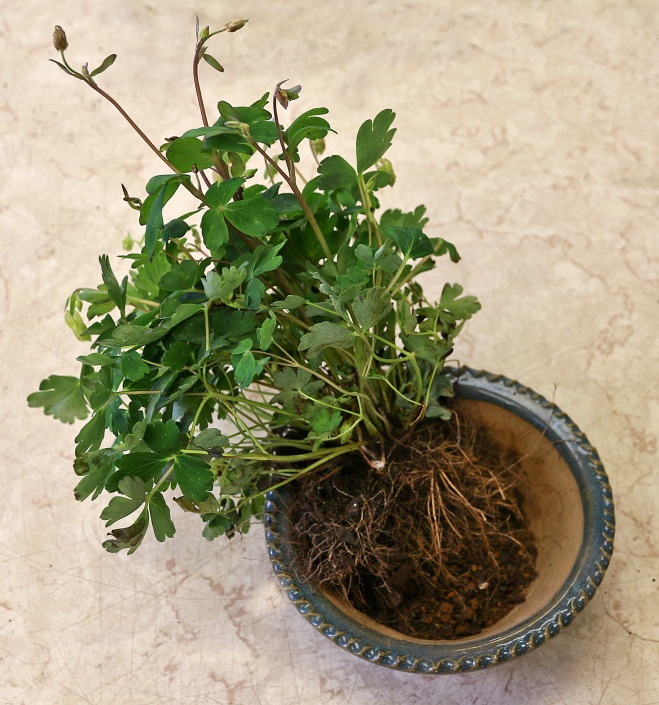 The first plant was positioned in the new container

Additional soil mix was added and gently firmed with a chopstick

This companion planting of ‘Little Lantern’ columbine is only an example of what can be created from commonly available perennials at local garden centers. There are hundreds of different Hosta cultivars which can also be used as well. Annuals can also used as companion plantings as well. 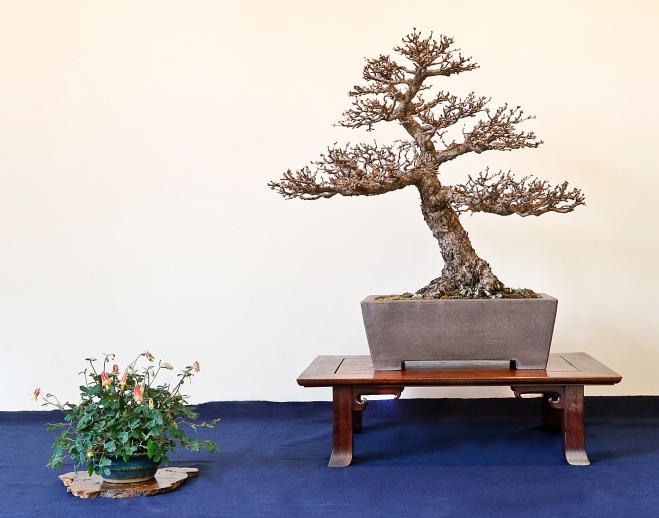 This bonsai display is being prepared for the 49th Upstate New York Bonsai Exhibition on May 16-17, 2015 in Rochester, New York. Everyone is invited to visit the exhibition and see nearly 100 beautiful bonsai including my American larch bonsai. Also, it is no accident that both the American larch and ‘Little Lanterns’ columbine are both native to eastern North America. It is sometimes desirable to use companion plants which grow in the same area as the bonsai. 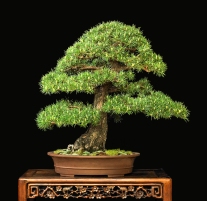